Swami Sarveshananda is also the National Director of Chinmaya Mission Yuva Kendra (CHYK) West, the youth wing of Chinmaya Mission West. CHYK West manages CHYK chapters all across North America including West Indies. CHYK West aims to increase spiritual awareness among youth and young adults (18 – 35 years) so that they live life purposefully – with a clear and noble personal vision and an attitude of service to the community. Swami Sarveshananda was himself a CHYK while growing up in India, and received direct guidance from Pujya Gurudev, Swami Chinmayananda. A dynamic and engaging speaker, Swami Sarveshananda works tirelessly to spread the wisdom of Vedanta through retreats, workshops, camps and innovative youth programs that inspire young people.  Swami Sarveshananda has touched many lives through his service, dedication and loving presence. He is popular with children and youth because of his ability to connect with young minds.

Swami Sarveshananda’s weekly schedule includes conducting satsangs, study groups, Devi groups, and Bala Vihar sessions. Additionally, Swami Sarveshananda holds other events at the mission such as training sessions, annual camps, picnics, walkathons, and the popular lock-ins for children. He is also frequently invited by Chinmaya Mission centers all around the country to conduct Jnana yajnas and annual camps.  In spite of a demanding schedule, Swami Sarveshananda is never too busy to bring cheer to little child, guide a restless teenager or joke with volunteers to light up their day. Swami Sarveshananda handles his busy workload with a smile. His calm demeanor and easy-going nature puts everyone at ease. He advises, “Walking the spiritual path is not easy, but it’s worth it. An ounce of effort makes a world of difference to us and the world around us.”

For more on Swami Sarveshananda, read his interview  with Brahmacharini Suniti Chaitanya.

Sin is never in action, it is always in reaction.
-- Swami Chinmayananda 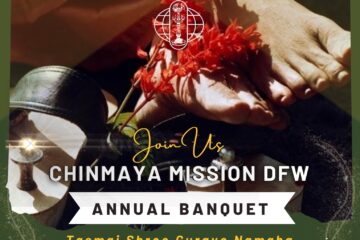